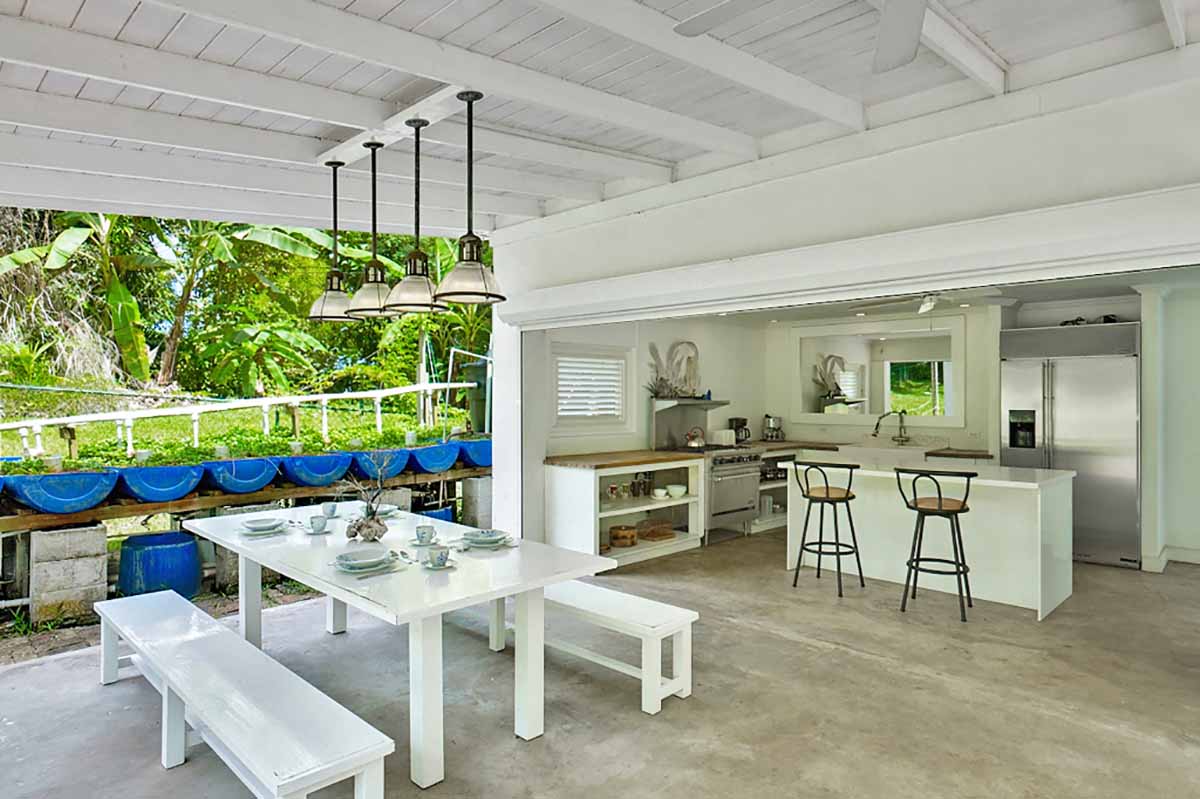 Tree House, located in Chimborazo, St. Joseph, and operating completely off-the-grid, is a one of kind, Barbadian architectural gem that has succeeded in taking thorough advantage of all that our tropical climate has to offer.

What is most intoxicating about this house is the essence of Zen that accompanies being fully and sufficiently sustained off of our environmental elements without the ransacking of its habitat or any imposition on its natural order. This serves not only as a pristine example of sustainable living, but also an echo of the lifestyle and persona of the one who inhabits it.

Hearing the phrase ‘living off-the-grid’ can sometimes take one’s mind to a place of disconnection and recluse. However, contrary to this, everything about this home demands to be shared with friends and family. Completely encased in greenery, the house has the feel of an island retreat but takes us one step further into the realm of self-sufficiency, especially given its surrounding vegetation— a spectacle of lush grounds flooded with edible produce. From fruits such as avocados, guavas, bananas, and cherries, to herbs and spices like ginger, lemon grass, and basil, the extensive outdoors is a home cook’s dream, and a personal garden pantry. 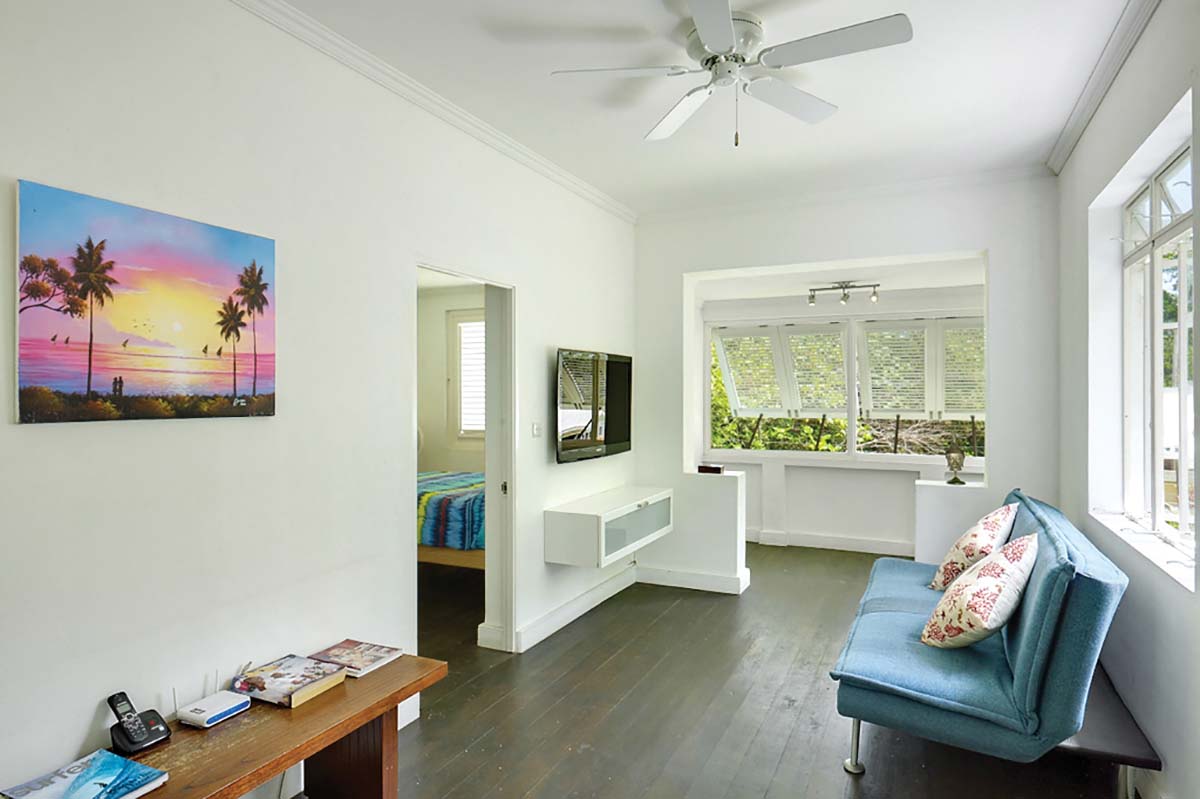 This St. Joseph home serves as a perfect example of a concept of sustainable living often overlooked by homeowners— spatial minimalism. At only 1,200 square feet, the house boasts one bedroom, a bathroom, a kitchen, living space and a veranda. This small scale allows all spaces to be closely linked to the outdoors without compromising comfort. Minimizing our housing footprint decreases the level of excavation and environmental disturbance done to the land.

Yet again crushing the conventional, roll up hurricane shutters stand in place of what in any other case would be a walled boundary between the kitchen and veranda, which would, as expressed best by the current occupant, ‘steal his space’. This feature acts as a key design component of the architecture by opening up this small, cozy home to the outside, interweaving nature into its interior and providing a larger, open area to live and entertain. As a result of this, this duo-space presents opportunity to host large groups of people at a time. Whether it be quickly plucking some mint leaves to top off a classy mojito jug for a cocktail party, or snatching up some basil to garnish a homemade lasagna for an intimate dinner function, this house leaves little to be desired for engagement and functionality even at its small scale. 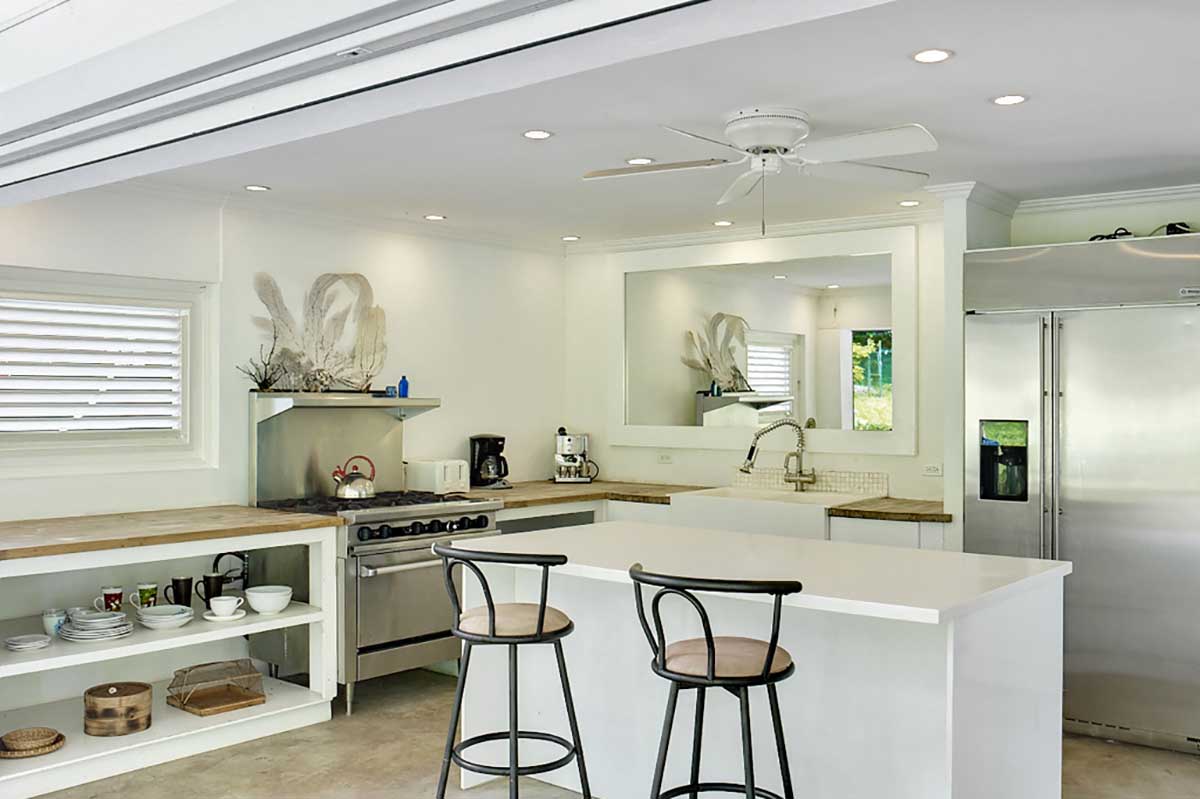 The current tenant walks us through a routine divided between property maintenance and personal gain from this lifestyle, which stands as a noteworthy portrayal of the give and take necessary between nature and its inhabitants. Although the system in place is configured for 24/7 use of renewable energy, current technical limitations have altered the capacity of energy storage for the time being. Mornings start particularly early, waking up at 4:00am to set the system to “off grid” using a switch in a tucked away electrical closet before work. Rooftop solar panels mean minimal requirement of power mains. During the day the property runs off of 100% renewable energy, powering everything from kitchen appliances, fans, the television and Wi-Fi.

At the end of the workday, the house is again manually switched back onto the grid and energy use is limited to the consistent operating of the refrigerator and use of the television. This system drastically cuts energy costs, with bills generally payable at under $20 BBDS. 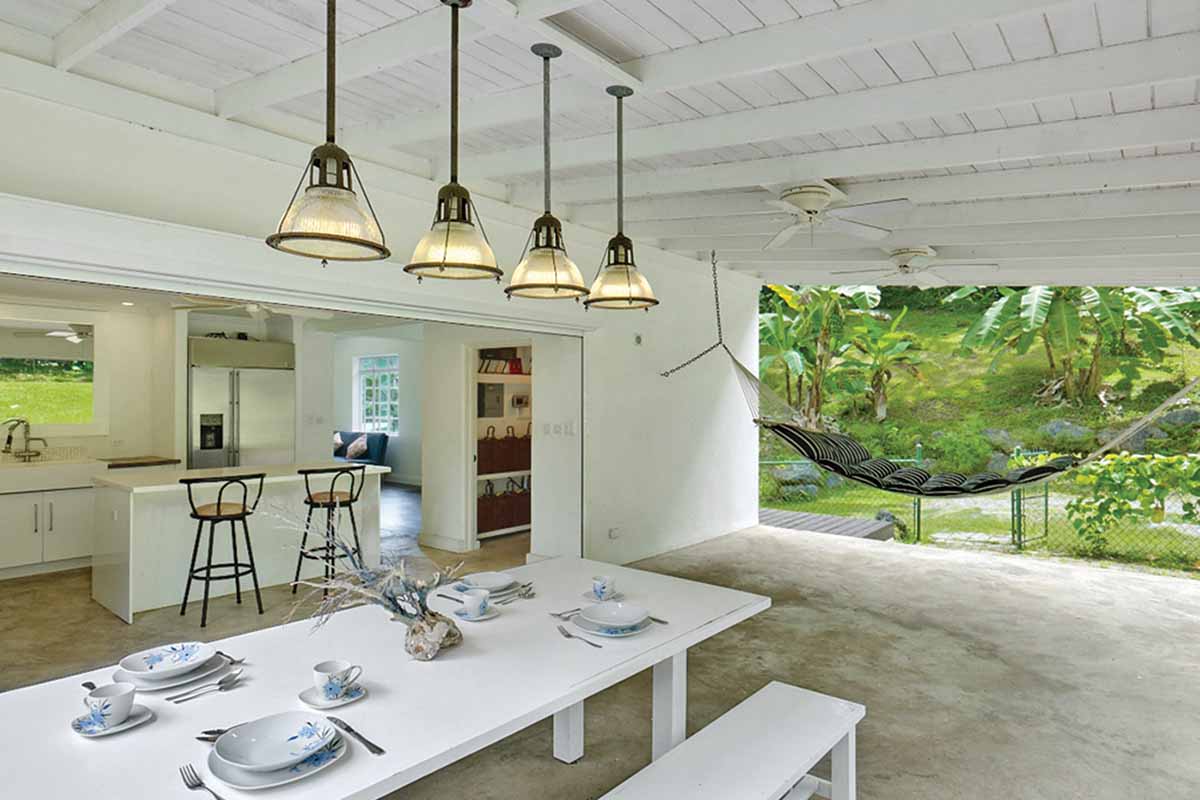 In addition to this, gutters wrapping along the roof line collect rainwater for use in providing running water throughout the household, as well as to be used to operate an aquaponics station situated just off the side of the veranda. The use of aquaponics acts as an irrigation system to a small soil-less garden elevated above the ground. Collected rainwater, along with the waste produced by fish stored in a large tank, are used to fertilize the crops. In turn, water is cleaned through filtration through the plants, and is then returned to the fish tank. The combination of aquaculture and hydroponics creates a system where both fish and vegetables can thrive simultaneously. This corresponds with the lack of need to purchase fertilizers, using 1/10 of the quantity of water needed for traditional soil gardens due to effective water circulation, and faster growing, organic fruit and vegetables.

With all this in mind, it is no question that this tranquil, tucked away piece of architecture shows exemplary use and preservation of our island’s resources, and stands as a symbol of what the future has to offer our local homes.